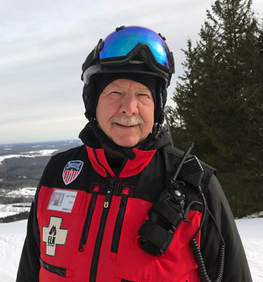 Robert W. Bluff joined the National Ski Patrol in 1968 as a member of the Poco North Ski Patrol.  Currently a member and Pro Patrol Director at Elk Mountain, Bob also served at Tanglwood and Mast Hope Rapids where he was the Patrol Director for 13 years.  He was a Section Chief, Assistant Region Director and S&T Advisor for the Eastern Pennsylvania Region before his appointment as the Eastern Division OET Supervisor.  During his 10 year tenure as a member of the Division S&T Steering Committee he continuously promoted S&T Clinics, Ski with an Instructor Programs and Patroller Schools.  Bob received National Appointment #6583 in 1986 and achieved Certified Status #497 in 1997.  A recipient of a Distinguished Service Award and a Meritorious Service Award, Bob received a Silver Merit Star as the runner up for the National Outstanding Administrative Patroller in 1998.  His main and most significant contribution to NSP is his ability and gift for handling people.  Bob always has a way of making even the most stressful OET evaluation a positive and enjoyable experience.