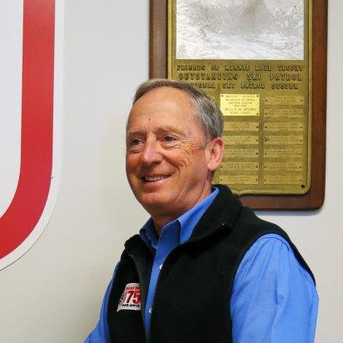 Ed Joined the Watatic Ski Patrol in the EMARI Region in 1979.  Ed moved to the Wachusett Ski Patrol in 1980 and became involved in Patrol Leadership as a first aid instructor, Supervisor of the Aid Room, Assistant Patrol Director, and Patrol Director.  While serving as patrol Director, Wachusett won the NSP “Large Alpine Patrol Award”.  He served the region as Senior OEC Chief Examiner, OEC Administrator and Regional Director.  In 2007 he was asked by the National Chair to assume the role of National OEC Supervisor, a position he held until 2013. At that time he decided to run for and was elected to the National Board for two (3 year)  terms.  While on the National Board he served as Chairman of the Board for 3 consecutive years from 2014-2017.

Ed served as Editor/author/photographer of the OEC 5th edition and currently is serving in the same capacity for the 6th edition.  He has served as an Instructor Trainer in OEC, Instructor in alpine toboggans, CPR Instructor and Senior OEC TE.

​Ed was awarded National Appointment # 7858 in 1994.  In 2005 he was awarded the National Chairs Outstanding Administrative Patroller Award and given the Gold Merit Star.  In 2004 he was awarded a Meritorious Service Award and In 2008 the Distinguished Service award.  In 2011 he was presented the National Service Excellence Award #4 for his work on the 5th edition of OEC.  In 2015 he was awarded the highest recognition awarded to a patroller, the prestigious Minnie Dole Award #27 for his significant contributions to the NSP.  Additional awards he has been given include 3 yellow merit stars, a blue merit star, and 2 purple merit stars.