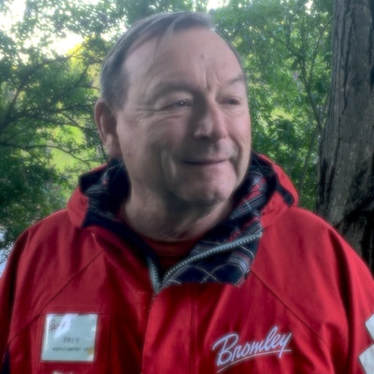 ​Frey Aarnio joined the Brattleboro Ski Patrol in 1969 where he was named the Candidate of the Year in 1970 and the Outstanding Instructor in 1978.  He served as the Assistant Patrol Leader and Patrol Leader from 1980 through 1984.  He became a Senior Alpine Patroller in 1976 and shortly thereafter, received National Appointment Number 6642.  When Hogback Mountain closed their doors in 1985, Frey joined the Okemo Ski Patrol where he was named Patroller of the Year in 1986.  In 1989, he moved to Bromley Mountain where he has actively patrolled ever since.   He received a Distinguished Service Award in 2008 and has been the Patrol Representative at Bromley since 2014.

While Frey’s patrolling career includes an extensive list of personal accomplishments and contributions at every level of the National Ski Patrol, he is best-known for three separate but very distinct accomplishments.  First, his untiring devotion as a champion of the rank-and-file patroller through his positive impact on the content, quality and delivery of our educational programs.   As a Region Advisor, Division Supervisor and National Transportation Program Director, he has been a major contributor to many improvements in the quality, consistency, instructional goals and capabilities within the Senior Program, the National Transportation Program and the Transportation and Patroller’s Manuals.  Second, would be his very unique ability to recognize new talent from within our ranks.   As a highly recognized leader across many disciplines and venues, he has very consistently identified patrollers with potential, motivated them to learn the skills and knowledge necessary, then successfully guided them to achieve the leadership roles they never thought possible.   Last, but certainly not least, has been his astounding commitment to the Young Adult Training Program where he not only provided his technical expertise as an accomplished leader, trainer and evaluator, he began the process of recruiting patrollers with potential and helped guide them to leadership roles at every level of this organization.

​Frey Aarnio has devoted his entire adult life to the National Ski Patrol.  He has provided us with a very profound level of leadership, an overwhelming list of positive contributions and an unparalleled passion for the quality, content and effective delivery of our educational products.  For nearly five decades, his enthusiastic devotion to the stated mission of the National Ski Patrol has quite clearly epitomized the very foundation of the motto: “Service and Safety.”