In Memory of Jim Decker 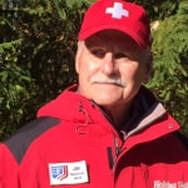 Jim Decker, former Region Director, Former NBOD member and recent Hall of Fame Inductee passed away
this morning (Sunday May 31st). He would have been 78 in October.  I am sending this to Division members
who may have served with Jim, NBOD members and National Awards Committee Members who may
remember Jim’s HOF nomination.  His induction into the HOF was announced last August. There are no plans
at this time; a memorial service will be held later in the year. - Jerry Sherman

In my tenure as Region Director before taking over as Division Director, I only met Jim Decker once and saw him several times at the Spring Officers Meeting.   So, in making this sad announcement, it seemed fitting that the reactions of his good friends in ski patrol will say more than I ever could.  Rest in peace Jim Decker. - Cal Goldsmith
Jim Decker was a good friend and a solid NSP board member. He always had the best interests of the NSP in his heart when he voted on a Board Action. He was a gentleman and a scholar. I thought of him as a role model who taught me it was fine to disagree, but he was never disagreeable. I picked up that phrase and used it over many years, and still do. I will miss Jim.

Jim was a significant contributor to this NSP organization and was appropriately named to the National Hall of Fame.  Moreover, Jim was a gentle soul and always had the time to listen to patroller issues and concerns.  We will miss him.

Very sad news. Enjoyed serving with him on Board.

Jim was a real gentleman and a friend to all of us that served with him.  I really enjoyed his time on the board.  He was always the one that would listen to all of the discussions and then speak.  And when he spoke, everyone would listen and usually follow his advice.  Jim was definitely one of the right members to serve on our national board.

To say he will be missed is saying so little but, I for one am a better person for having known him.  Jim was one of the reasons we are all so proud to be a part of the NSP family.

Oh no! So sorry to hear this news. He was a great guy. RIP Jim…

Jim will be very much missed by HVSP as well as the entire NSP system for the tireless service and contribution he has made over the years.
For me, Jim was the first patroller I had contact with. I met Jim at the Ski Sale in West Seneca as he was posting recruitment notices for the HVSP. After an enthusiastic  conversation with him, I applied and became a HV Ski Patroller. My heart and prayers go out to Jim and his family at this difficult time.

I too am sad about the passing of long-time Holiday Valley patroller and former WNY Region Director, Jim Decker. I'm sure that you also know that Jim served on the NSP National Board. He will be greatly missed.

Terry indicated that there will be private service for Jim this week and that a newspaper notice will follow at a later date. Terry also requested that no calls be made at this time.
Please keep Jim's family in your prayers. - Dan Meess, WNR Region Director