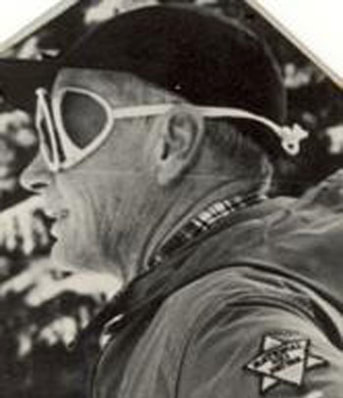 John E.P. Morgan was directly involved with three major historical events in US ski history: the establishment of the National Ski Patrol, the development of the Tenth Mt. Division and the creation of Sun Valley resort and its installation of the world’s first chairlift.

Born in Lenox, MA in 1895,  he was a Naval Lieutenant who served in World War I. As an all-around athlete he took up skiing after the war and joined the Amateur Ski Club of New York in the late 1920’s were he met and became friends with Roland Palmedo. John, along with future NSP founder Minnie Dole, were part of Roland Palmedo’s “Safety Committee” in the early 1930’s to study ski accidents and identify skiing risks. It was this committee’s findings that laid the foundation for what would become the National Ski Patrol. He was one of the people who promoted the separation of the NSP from the National Ski Association (N.S.A.) so that NSP could be their own organization and not just a committee under the N.S.A.’s control.

Finances to support the National Ski Patrol were problematic from the start for Minnie Dole and it didn’t take long before Dole appointed John E.P. Morgan as NSP’s Treasurer. He became Dole’s financial savior and right hand advisor. In 1940, he instituted the first “National Ski Patrol Week” where donations would be collected at ski areas for the NSP. Dole commented several years later, of Morgan, “From the day I was given responsibility of the National Ski Patrol, John was all around me, ahead to encourage, behind to give me a push when needed, but by my side always”.

After the outbreak of World War II in Europe, Morgan accompanied Minnie Dole to Washington, DC to meet with the ‘War Department’ officials to create a special force of ski troopers. John stayed in Washington and became a key person in the development of the Tenth Mountain Division.

John E.P. Morgan was also one of the three authors, along with Minnie Dole and Robert Livermore, of the first edition of ‘National Ski Patrol Manual’, printed in 1941.  The importance of Morgan’s contributions to the founding and creation of the National Ski Patrol are evident in his assignment by Dole of National Appointment #11.

In addition to his work and involvement in the National Ski Patrol, he worked with Sun Valley developer, Charlie Proctor, in the mid – late 1930’s, laying out the first ski runs for the resort and engineering and testing the resort’s and the world’s first chairlift.

John E.P. Morgan passed away in August 1971. He was inducted into the US National Ski Hall of Fame in 1972.