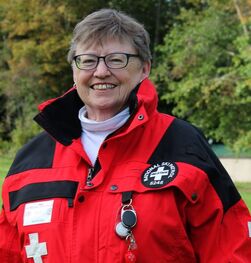 Mary L. Murrett
​Year inducted: 2021
Primary Patrol: Kissing Bridge, WNY
Years of Service: 48
​
Mary L. Murrett began her ski patrol career in 1973 with the Intermont Ski Patrol in the Western. New Region.  Very shortly thereafter, Mary assumed her first leadership role as the Training Officer for her local patrol.  She quickly advanced to becoming a Senior Alpine Patroller.  These were the humble beginnings of what would become a lifetime of valuable service to the National Ski Patrol at all levels.  Mary’s activity at the Region and Division levels included serving as the Western New York First Aid/ Winter Emergency Care and Outdoor Emergency Care Advisor. In 1984, Mary was appointed to be an Eastern Division Outdoor Emergency Care Supervisor where she played a key-role in the creation of the first edition of Winter Emergency Care textbook and served as a contributor for collateral publications such as the WEC Instructors Manual.  It was this Instructor Manual that ultimately gave birth to what is now known as the Instructor Development Program.  Mary also served as a major contributor during the second and third editions of the Outdoor Emergency Care textbook.

The transition from the American Red Cross Advanced First Aid Program to the Winter Emergency Care Program was a monumental task.  During that initial development, transition and implementation period, Mary actively recruited future leaders to create an expanded cadre of instructors and instructor trainers. Mary, and many of the OEC Supervisors throughout the program, were also tasked with assessing ways to broaden the OEC training perspective by seeking alternative applications within the outdoor community.  This early team effort helped frame what would eventually become an unprecedented recognition of the NSP and OEC brand within several outside agencies.  While her administrative prowess and outstanding leadership continued through her term as the National OEC Program Director, her contributions to the National Ski Patrol never waned.  While the foundation of her legacy is based on remarkable accomplishments, it is clearly punctuated by her unique and highly successful ability to recognize talent, attract, cultivate, develop and deploy energetic and highly skilled patrollers into key leadership positions.
Leadership Roles, Program Activity, Awards and Recognitions: