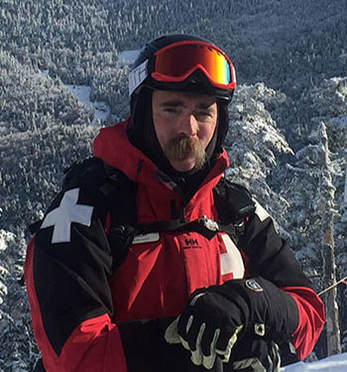 Richard F. Hamlin joined the Smugglers Notch Ski Patrol in 1973 as a second generation “Junior Patroller”. He has a remarkable record of leadership and accomplishment throughout his entire NSP career.

In 1990, Mr. Hamlin received National Appointment Number 7235 based upon his noteworthy commitment and contributions at the Region and Division levels. He has been a champion of program delivery across all of our educational disciplines and had long-been a valuable asset within the Outdoor Emergency Care and Transportation disciplines. In addition to his outstanding capabilities as an Instructor, Instructor Trainer and Senior Trainer/Evaluator, Certified Examiner and Certified OEC Program Chair, he was instrumental during the initial transition from our American Red Cross roots to the successful implementation of Winter Emergency Care. Rick served the Northern Vermont Region as a Section Chief and Region Director. In 2002 he was asked to serve on The Transition Team to study the governance of the Eastern Division a year later he was named the leader of the Governance Committee that worked out all of the details of the current by-laws of the Division. He was elected as the Eastern Division Director in 2004 and not only did an outstanding job of leading the Division but also had a huge impact at the National level and is credited for influencing the National Board to implement the one Patroller one vote model for selection of National Board members.

Mr. Hamlin’s patrol career has been punctuated with a record of outstanding leadership at all levels. Each and every position he has
held was enhanced by his tenacity, wisdom and a get-it- done mentality. His loyalty, passion and untiring devotion to duty has proven contagious with the countless patrollers he has come in contact with. He has led by example and in the process, recognized, promoted and captured the talents and capabilities of many of today’s leaders at the Division and National level. His vote of confidence, support and encouragement has been inspirational and has led others to seek higher levels of leadership at all levels of the National Ski Patrol. Mr. Hamlin’s performance at the Region and Division level was exemplary