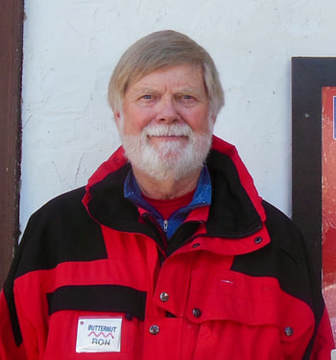 Ron Clark’s contributions to the National Ski Patrol have been long and varied. He joined NSP as a member of the McIntyre Ski Patrol in New Hampshire in 1973, moved to Powder Ridge in Connecticut in 1975, and is currently a member of both the Butternut Ski Patrol and the Thunderbolt Ski Patrol in Western Massachusetts. Ron became a senior in his third year, a Mountaineering Instructor in 1980, and an Avalanche Instructor in 1983. Ron served the Connecticut Region as Mountaineering Advisor from 1980 to 1985.

An active instructor, he has taught Avalanche, Mountaineering, and Nordic Seminars at Junior (YAP) Seminars, region and division programs, and at several Powder Fall Conferences in Utah and Val d’Isere, France. Under Ron’s guidance the Ski Mountaineering Program officially became the Mountain Travel and Rescue Program as it is known today.

Ron received National Appointment #7037 in 1988, a Distinguished Service Award in 1996, and a Gold Merit Star as the Outstanding US Administrative Patroller in 2000. Anyone who has spent any time with Ron knows that he has an easy-going personality and always find the humor in any situation.