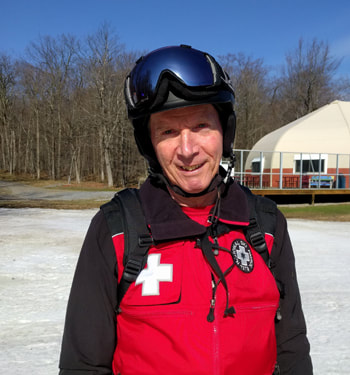 Scott joined the Bristol Mountain Ski Patrol in 1978 and immediately developed a lifelong passion for patrolling. After becoming a Senior patroller in 1982 he began instructing S&T. He quickly advanced to become a Senior TE in 1983, IT on Division Staff in 1989, and Steering Committee in 1993.  He continues to teach S&T and OEC, and was a Senior OEC TE. He currently is the Region Lift Evacuation Program Director.

In 1995, Scott became the Division S&T Snowboard Advisor.  He formed a team of patrollers on snowboards and traveled throughout the division to demonstrate that snowboards did indeed have a place in patrolling. His advocacy and leadership built the foundation for patrolling on alternative equipment.

At his local Bristol Mountain patrol, Scott has been Chairman for Evacuation Team, S&T, and the Building Committees.   He has served as Hill Chief , Patrol Director, and Pro Patroller. Not only did Scott lead many patrol committees, he has encouraged and mentored other patrollers to become involved and take on leadership roles.  He continues to provide support and guidance to today’s leaders.

Scott received his National Appointment #7379 in 1991, and over the years has been awarded Four Yellow Merit Stars, a Distinguished Service Award  and a Meritorious Service Award.